If you’re looking to import from China for your business, it’s advisable to read up on the top China shipping ports for products and merchandise.

It comes as no surprise that China's shipping ports are among the busiest in the globe because of so many items being manufactured in China.

China has more than 2,000 minor ports and 34 main ports. In fact, six of the world's 10 biggest container ports were situated along the shoreline of China, extending from border to border of the nation.

Besides being the world's biggest consumer market, China has also become the world's factory, manufacturing everything from household goods to machines, parts, and electronics.

As an industrial powerhouse, it is important not to disregard and undervalue the financial impact and competencies of China. This being said, it should stand to reason that China is home to six of the world's top 10 biggest shipping ports.

In addition to understanding how to deal with Chinese suppliers, it's also likely advisable to read up on points of entry or China Shipping ports for products and merchandise if you're looking to import for your business.

The Port of Dalian is a deepwater port in the southeastern Liaoning Province of China and the largest port in northeastern China, located at the mouth of Bohai Bay. The Dalian Port is situated in the province of Liaoning, which shares a North Korean border. It is also the most ice-free port in northern China.

Its reputation as Mainland China's second-largest container transshipment hub increases its trade movements to and from the Pacific.

Dalian acts as the main port for China's North East region and has always been designed to be a port town with its conspicuous place on the tip of the peninsula of Liaodong.

It also provides seaports situated in northern and eastern Asia and the Pacific Rim in addition to linking to ports in over 150 nations. It is China's northernmost ice-free port and one of the country's five largest ports.

The Port of Dalian remains strongly dependent on traditional heavy industries such as coal, unlike many other China shipping ports, which are becoming rapidly international.

Because of its position, cargo from and into neighboring provinces like Sichuan, Guangxi, Guizhou, Yunnan, and Jiangxi also passes through Guangzhou Port. It is located at the junction of the rivers Beijiang, Dongjiang, & Xijiang all endowed with expressways, railways, waterways, and aerial services.

Located at the orifice of the Pearl River in Guangdong Province, close to Hong Kong and Macau, this South China Shipping port is widely regarded to be the primary port in the Pearl River Delta area. It primarily encompasses manufactured products, industrial goods, and farm products.

Formerly a trading port, during the Ming and Qing dynasties, it operated as one of China's busiest ports. Currently, it has ocean links to more than 250 ports in more than 70 nations around the globe thanks to its perfectly positioned spot.

Port of Hong Kong, formerly the world's top shipping port, has seen its shipping volume drop behind in past few years, first, in Singapore then Shanghai and Shenzhen in more recent past.

Hong Kong's Port once functioned as a cargo catalyst for entry and departure from China. However, since Chinese officials have decided to increase their operations at mainland ports like Shanghai and Shenzhen, there has been more convenient to go straight to the mainland and the demands to dock in Hong Kong ports have been reduced.

Nevertheless, it remains one of the busiest ports in China. The harbor's natural shelter and deepwater amenities ensure good mooring conditions and many different kinds of vessels are handled. 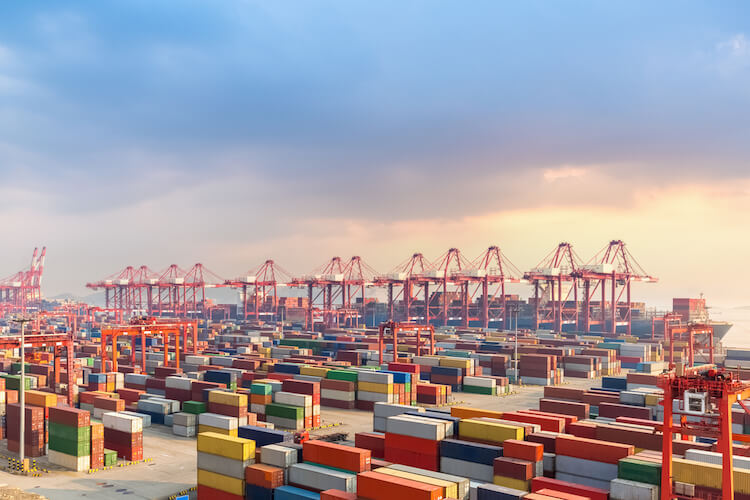 The Shanghai Port has now likely strengthened its position as not only China's busiest port but also the rest of the world. Port of Shanghai surpassed Singapore in 2010 to become the busiest shipping port of all time. With more provisions in place to boost potential, Port of Shanghai continues to evolve.

The improvements of Shanghai Port in the latest years have been incredible as a gateway terminal for the Yangtze River Delta. Presently, the Yangshan Deep Water Port is also considered the world's biggest automated container terminal.

Given China’s role as the world’s largest exporter, its strategic location makes it one of the most important ports for foreign trade.

Qingdao, famous for its beer products, is also one of the main port cities in China situated in the province of Shandong in eastern China. Qingdao Port is renowned as a port for international transshipment. It is situated in the basin of the Yellow River in Shandong Province.

It is designed with a huge metal iron ore holding terminal with efforts to make it the biggest iron ore handling terminal in the globe.

IThe Qingdao Port also joined a partnership deal with three other Shandong ports and the Busan Port of South Korea to build a warehousing and transporting facility in Northeast Asia.

Shenzhen City, Guangdong is an area that is progressively known for its high-tech sectors and new industry performance. The Port of Shenzhen, located in Guangdong Province, binds the southern heartland of China to almost the remainder of the globe.

The port is made up of an east and west port. Ultimately, it is dispersed over some 250 km of the shoreline of the city. At Shenzhen Port, more than 550 vessels arrive month by month, spanning more than 120 global container trajectories.

Its spectacular economic zone has attracted global businesses. But it is likely more recognized for its high-tech environment, with hundreds and hundreds of manufacturers of electronics setting up there. It is projected that the electronics industry in Shenzhen now employs over 20 million individuals.

As an outcome of a fusion between Ningbo and Zhoushan ports, this busy port is headquartered in Zhejiang Province of China.

Ningbo-Zhoushan Port maintains the throne as the first port to handle 1 billion tons of cargo in just one year. This is mainly due to the enormous crude oil terminal and berth loading ore of the shipping port. It is also home to a warehouse for local liquid chemicals.

Port of Ningbo-Zhousan's infrastructure includes an enormous crude oil terminal and ore loading berth that effectively helps make it the busiest cargo tonnage port in the world, even though it serves far lesser cargo containers than Shanghai and Shenzhen.

The lovely town of Xiamen, located in the province of Fujian, is the main port that facilitates a lot of trade among both Mainland China and neighboring Taiwan. It was the first mainland shipping port to start delivering cargo straight to Kaohsiung Port in Taiwan. Even today, it remains to manage a lot of cross-straits trade.

The port itself stretches along the shoreline for about 25 kilometers and spreads over 12 distinct regions as well as the waterway and deep-water facilities. That being said, it serves more than 60 shipping routes and connects worldwide with more than 55 nations. It handles about 470 vessel calls a month on average.

Tianjin is one of the four municipalities in China alongside Shanghai, Chongqing, and Beijing on its own. Tianjin Port is Northern China's biggest port serving 10 northern provinces including Mongolia.

It is previously known as the Tangu Port and is Beijing's primary maritime entry point. It now encompasses 100 square kilometers, making it China's biggest man-made shipping port and one of the most linked ports, working as a connection between Central, West, and Northeast Asia.

Tianjin Port was also one of the oldest foreign China shipping ports with origins linked back to the Han Dynasty. At present, it links up with the world's more than 250 shipping ports and 150 locations.

The port of Yingkou is a primary shipping facility for certain areas of Mongolia as the second largest port in the northwestern region after Dalian. Imports of corn, sugar, mineral resources, carbon, metal, and automobiles are the primary kinds of cargo in the port.

Yingkou Port's stretches back to almost a couple of centuries, with river and maritime trades to a great extent. Several investments have been created over the previous decades to improve the port, including building a shipyard at Bayuquan Port.

Yingkou Port has also joined the world's top 50 container ports list. More lately, the port has established a close alliance with Russian Railways to design and build a global terminal and logistics center in Russia that is collaboratively serviced.

With the many massive China shipping ports available, it can easily get overwhelming for a newbie foreign importer. For assistance in the most relevant port that’s apt for you and your cargo, we at Lazpanda will be happy to guide you.

Send us a message today to learn more.

Import from China actually is not a simple task. If you are working with a sourcing agent like me, then you’re already way ahead of the game. But what if you’re one of the 99% of small business owners or Amazon sellers who are not familiar with importing from China. I want to share my sourcing expertise with you to help you grow business.

Learn how to save cost for importing from China with exclusive tips, only share with my private newsletter subscribers.
Please enter a valid email address.
Subscribe!
Something went wrong. Please check your entries and try again.
Need agent now!

Before foundered Lazpanda, thousands of brand name idea had come through, at last, I picked Lazpanda. Panda can present China, “laz” is short for lazy, that’s panda’s feature, also is our mission, help our clients save more cost.